In this post we wanted to focus in a little bit more and talk about the key factors in reviews that people consider when analyzing a business’ online reputation and finally deciding which business to choose.

In other words, we are going to talk about why people choose a business based on their reviews.

We previously presented a poll where we asked people on Facebook and Instagram to choose one out of three companies based on their reviews. It was surprising (or maybe not that surprising) to find that 88% of people would choose the company (Precision Plumbing) with five times as many reviews as its next competitor. 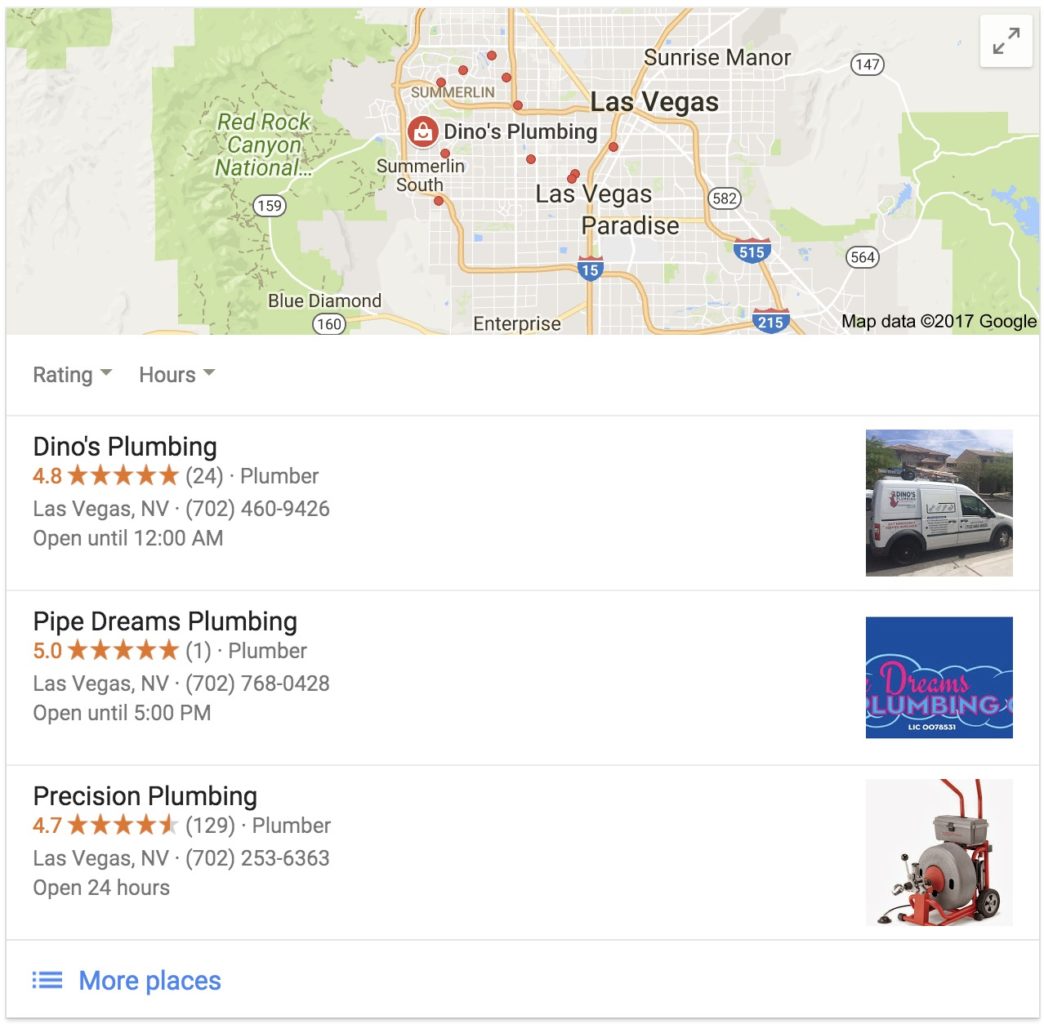 So, what is it that people were looking at to decide to choose Precision Plumbing? Here are the seven key factors in reviews people look for when deciding on a business to go with.

As you can see in the screenshot above, Dino’s Plumbing has 4.85 stars, Pipe Dreams has 5.0 stars, and Precision Plumbing has 4.7 stars. The ratings are all pretty similar – none of them really stand out. But we will give Pipe Dreams some credit – they have a 5.0 star rating, which is really great…except for the fact that they only have one review.

Now, just because Pipe Dreams has one review that’s really good, they’re still not in a safe position. We’ll get into that in another post, but just to give you an idea, if somebody leaves a really bad review, Pipe Dreams is in trouble. Their 5-star rating is going to go down to a 2 or 3.

Also, one review doesn’t really say much about a company. This brings us into our next key factor…

If your company has 3 or fewer reviews, especially 0, nobody will want to be the first to review you. It kind of gives the feeling that maybe you’re not providing good service, or maybe you’ve gone out of business. So number of reviews is very impactful and especially when you consider the above poll where 88% of people chose Precision Plumbing just because of the fact that they have so many reviews.

Review frequency represents how often people are leaving new reviews for your business. It’s our guess that Precision Plumbing is getting a couple of reviews a month and that they’re all pretty much positive. As for Pipe Dreams’ single review, who knows? That review could have been made years ago. At first glance you would have no way of knowing how old the review is unless you click in to actually read it.

Now if Precision Plumbing hadn’t had a new review in 3 months, for example, you might wonder if they’re still in business or if their service started to fall behind in quality.

Similarly, if you see a company that’s been gaining 1 new review every month over the last 5 years, you know it’s pretty steady and they’re doing solid work over time. This indicates the age factor in reviews.

A lot of people are going to look at different review sites. Kyle is more of a Google person, while Whitney’s more of a Yelp person. There are some people who use Yellow Pages, Angie’s List, or Better Business Bureau. Typically, your customers are going to leave reviews on sites they regularly look at. This is why you want to make sure that you have positive reviews across multiple review sites and that the ratings are all pretty much the same; not 5 stars here, 1 star there, etc.

6. How a Business Responds to Negative Reviews

The next of the key factors in reviews is how a business responds to negative reviews. This is a big one. Recently, we were doing research and came across a business that was in full-blown crisis mode. They had a string 15 negative reviews that were left in the past few weeks. What happened was the business owner put his controversial opinions online, some of his customers found out and they didn’t like what they saw, so they left 1-star reviews and it hurt the business.

The worst part was that the business was not responding, nor were they actively trying to increase their positive reviews. They just allowed the negative reviews to flow in and sit there, so now their star rating is less than a 2.

How a business responds to negative reviews is a really important PR move, anyway. Let’s say you get a negative review – what are you doing to remedy that? Are you just letting it sit there and ignoring it, or are you contacting that person to apologize and maybe offer some kind of incentive to give your business another shot?

7. Sentiment of The Reviews

The last of the key factors in reviews that people will look at is the sentiment of the reviews. Here’s what that means. It’s not just a 5-star review, it’s a 5-star review that includes a great comment. For example, “We had a great time, Kim was so great and she made our kids feel happy and welcome and she really encouraged them. Afterwards, our kids were just so excited and wanted to go back and so we’re coming back next weekend!”

Those are the kinds of reviews that you want to see. Plus, once you get those reviews you can highlight them on social media and broadcast them. That will really get people enthused and excited about your business.

This same principle goes for the negative reviews, too. A 1-star rating doesn’t really say much by itself (a lot of 1-star ratings say something), but a 1-star rating with a story is really telling. For example, “This guy was completely rude, he didn’t know what to do, he quoted us wrong.”

So there’s a big difference between a 1-star rating and a 1-star rating where they criticize you for your mistakes. Interestingly – we’re sure even you’ve noticed this – when somebody gives a bad review, they go all out to explain in detail what their experience was.